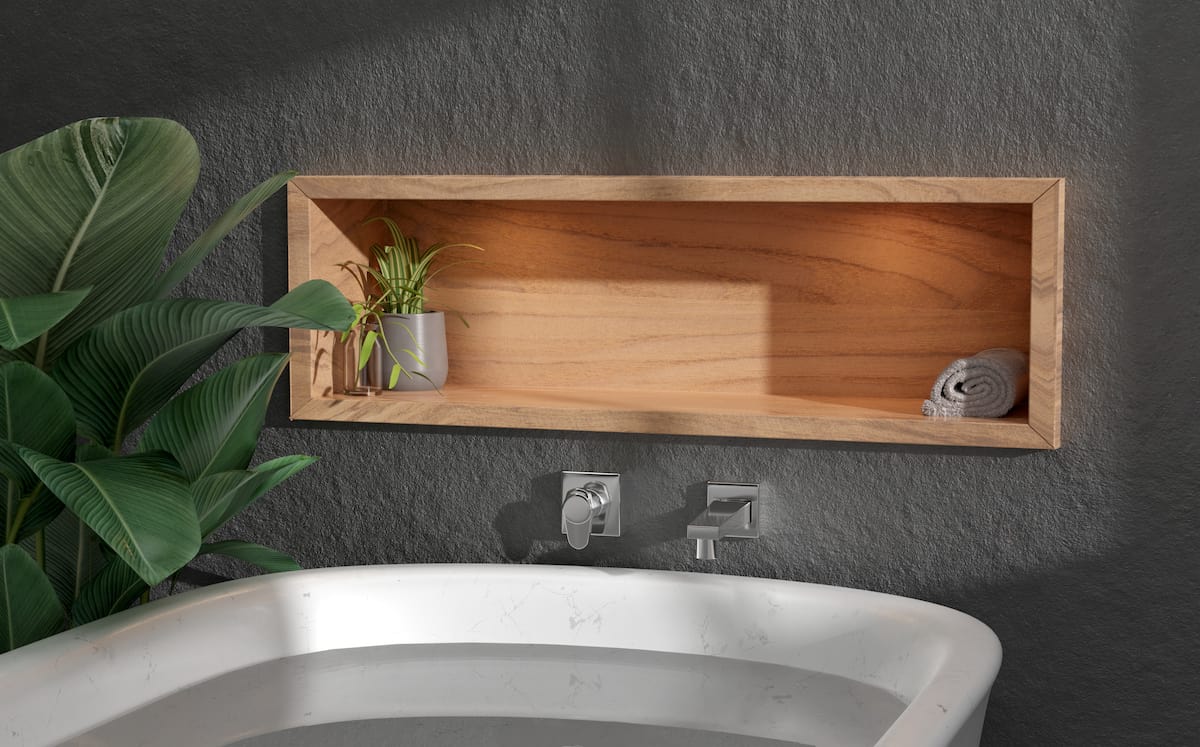 Did you know there are plants that absorb moisture? People usually put them in bathrooms to help keep the humidity down.

It’s something I’m considering for my home. You see, moisture is a problem in our upstairs bathroom. It shouldn’t be, because there is a window to the outside.

However, the bathroom doesn’t have an exhaust fan. And in the middle of the winter, who wants to open the window to freezing cold air?

That’s how the ceiling ended up looking like this. That’s mildew growing on the ceiling. Yuck.

Then I read about these plants for the bathroom that are designed to absorb moisture. I figured if I have this problem, you may, too. So I did my homework.

Which plants absorb moisture in a bathroom

While all plants absorb moisture in one way or another, there are certain species that do best in a bathroom. This is assuming you have a bathroom with some kind of light source.

Through my research I came up with these recommendations for the best indoor plants that can help absorb bathroom moisture. Plus, many of them are super pretty and will elevate the look of a bathroom.

Finally, it’s important to know that one of the most common ways to kill an indoor plant is overwatering it. So by having your plants in an overly moist environment, you’ll have to water them less often.

If you’ve ever seen ferns in the wild, then you’ve probably noticed that they tend to grow in shady, moist areas. I used to live on a shady street with deep gullies on the side of the road. They always filled when it rained. Not surprisingly, ferns thrived nearby.

It’s nearly impossible to overwater a fern. On the other hand, not watering a fern enough will kill it. Therefore, it’s the perfect resident for your bathroom.

Finally, ferns do best in indirect sunlight. So if your bathroom faces south or has a skylight and therefore sunlight all day, make sure you keep your fern in a shady spot.

They have striated reddish pink leaves with a darker edge. I know I think of begonias as flowering plants, but these ones are all leaves. They’re beautiful.

Turns out they love the humidity of bathrooms, too. And if you’ve got a bathroom that gets bright light, even better.

The one warning with putting Rex begonias in the bathroom: if too much moisture gathers on the leaves, it can damage them. So, towel them off after you towel yourself off to keep the plant healthy.

Prayer Plants love the moisture in bathrooms, so they’re an ideal plant to put there. Like many other bathroom plants that absorb moisture, it’s better for the Maranta to stay out of direct sunlight.

Some people mistakenly called the Calathea the Prayer Plant, because its leaves fold up at night. However, the true Prayer Plant is the aforementioned Maranta.

On the other hand, with its striped leaves and nocturnal behavior, it’s easy to understand how people can confuse the Calathea and the Maranta. Also, it does well in humid, indoor locations, such as a bathroom. Plus, it’s quite pretty.

The Peace lily will be a gorgeous addition to your bathroom. And it will love being there, as it appreciates warm, humid environments.

Additionally, if it can get some sunlight during the day, you’ll likely get more of its beautiful paper white blooms. And though it will soak up the moisture from the bathroom, if you see the leaves start to droop, that means it needs some watering.

You’re probably familiar with the Philodendron plant without knowing what it was called. That’s because this tropical plant has distinctive-looking leaves. Well, at least the Ginny variety of the Philodendron does.

To me they look as if you folded an oval piece of paper in half, and then made cut outs like you might a paper snowflake. Trust me, when you see it, you’ll recognize it.

Anyway, because the Philodendron is native to the Caribbean, Central America and other places near the equator, it will love living in your bathroom.

Now, I’m not sure if I had moisture-absorbing plants in my bathroom my ceiling wouldn’t have looked like it did. But I’m not going to take that chance and plan to buy some.

In the meantime, I went to Lowe’s and bought Zinsser paint and primer. The Zinsser brand is well known for blocking moisture.

Then, I repainted the ceiling so it looks brand new. Hopefully, the combination of the new plants and the new coats of paint will keep moisture in the bathroom at bay for years to come.