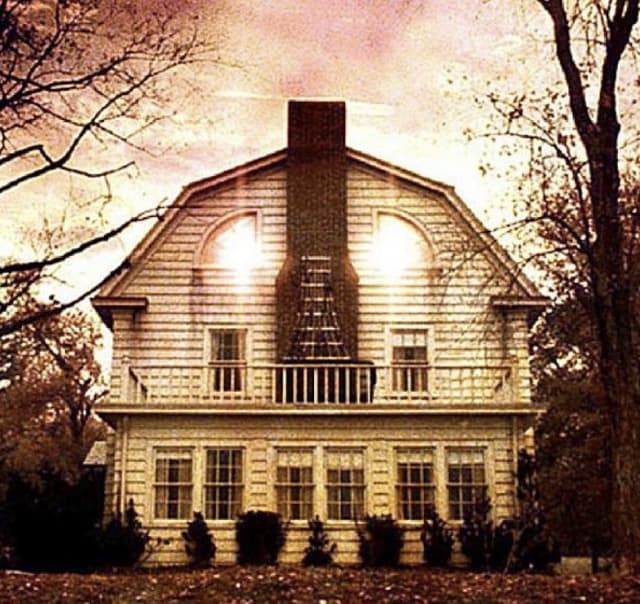 Growing up on New York’s Long Island, everyone knew our area had one of the most famous horror movie houses of all time. Known as the Amityville House, it was the site of a real-life horror, a murder.

Amityville is a real town on Long Island, located southwest of the town where I grew up. I was nine years old when the real-life murder of an entire family happened.

And it’s too bad that this home has such a bad history. It’s a beautiful house. Recently, it was for sale.

Where are horror movie houses in real life

This article is a round up of horror movie houses in real life. I realize this is probably a topic that’s most popular around Halloween time. Nonetheless, I enjoyed tracking down these real-life horror houses that appeared in movies. Plus, if they were ever for sale, I’ve included information I grabbed from their real estate listings.

The Amityville Horror House is a Dutch colonial that’s a waterfront home. It has a bulkhead and a boathouse. According to Zillow, its Zestimate is over $1 million. However, it last sold in 2017 for $605,000.

This book on Amazon about the real Amityville Horror murders shows a picture of the house. Also, you could always rent the movie on Amazon.

FYI, I’m told that the movie was actually filmed in New Jersey. The filmmakers used another Dutch colonial in the movie because it resembled the Amityville horror house.

Finally, if you try to do a Google street view of this home, you’re out of luck. Google has blurred all images of the house.

The Silence of the Lamb Movie Horror House

I recently re-read the book The Silence of the Lambs. It’s one of my favorites. If you don’t own the book, you should buy yourself a copy.

In addition, I love the movie, starring Jodie Foster. I believe it’s as good as the book.

If you’ve read the book, then you know that the killer Buffalo Bill is based in Ohio. But when filming the movie, they turned a Pennsylvania house in his place of horrors.

I found a Realtor.com ad for the home in Perryopolis, Pennsylvania. Perryopolis is located about 30 miles southeast of Pittsburgh.

Another excellent book to movie, The Shining is one of the scariest books I’ve ever read and the movie The Shining was even scarier. Of course, the hotel in the movie was its own character in this horror story.

Though the hotel in the book is supposed to be in Colorado, when it came time for filming, director Stanley Kubrick chose The Timberline hotel on Mt. Hood in Oregon.

The Timberline has embraced its roll from The Shining horror film. Just check out the Facebook post, below, from Halloween a few years ago. If that doesn’t make this place look spooky, I don’t know what does!

When my husband and I bought our first house, in a pre-planned subdivision, I referred to it as a Poltergeist neighborhood. That’s because in one section of the subdivision, all of the houses seemed to be cookie cutter images of every other house.

They were all the same shape and same color. Plus, because the houses were on such narrow lots, all the garages were in front of the homes.

And if you remember the neighborhood in the movie Poltergeist, you’ll recall this is how that subdivision is portrayed. That’s part of what made this horror movie so terrifying–that a nondescript house, that looks just like its neighbors, could be harboring such a scary secret, if you will.

So, where is the real Poltergeist house? It is in Simi Valley, California. That’s an area of Southern California northwest of Los Angeles.

According to one real estate website, it’s a four-bedroom, two bath, two story home. Its estimated value is about $960,000. That’s California real estate for you.

Modern Day Horror Movie Get Out

One of the best, modern-day horror films is Jordan Peele’s Get Out. Like many horror movies, the house in Get Out is beautiful on the outside and seemingly beautiful on the inside, except for its deep, dark secret inside.

The movie has the house set in New York. However, in real life, the house is set in Fairhope, Alabama. It seems entirely appropriate that this Southern style house would be the setting, given the underlying message of the movie.

Anyway, according to real estate websites, the home is located near Mobile Bay, has four bedrooms and is nearly 5,000 square feet. If it were to go on the market today, it would be listed at close to $900,000.