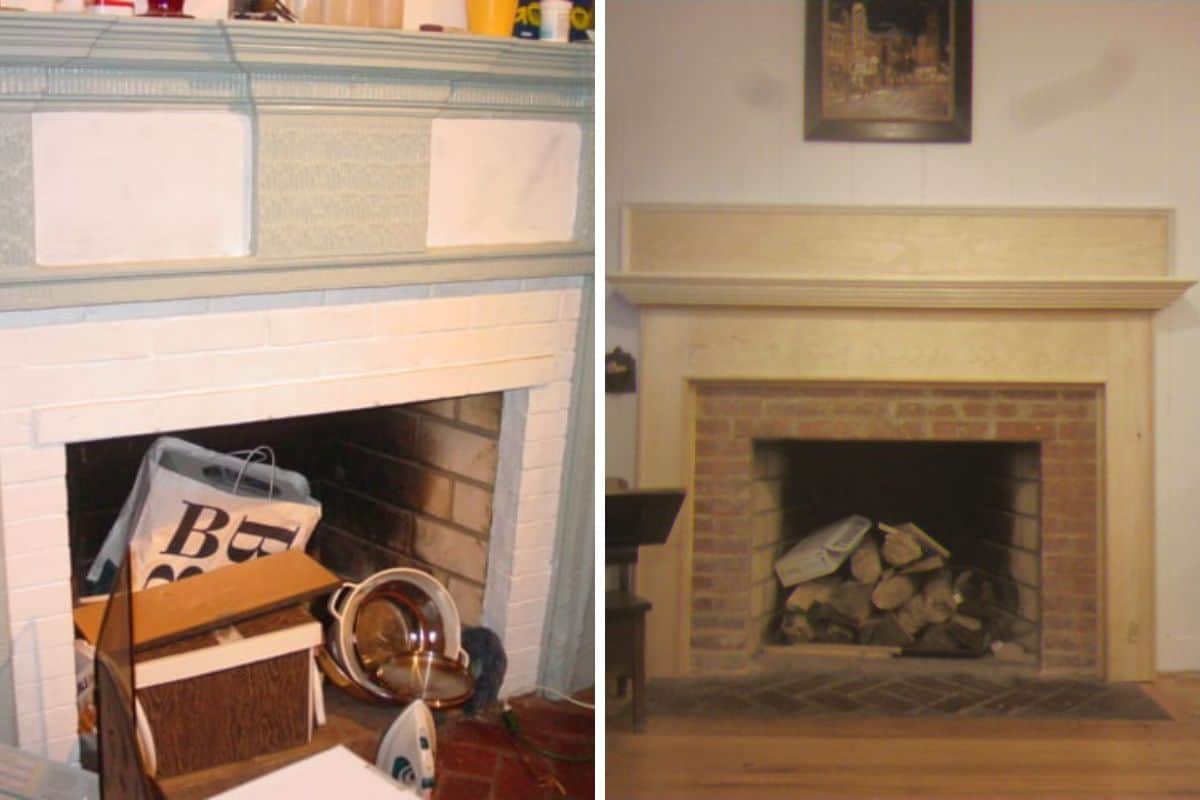 When Bill and I started our home renovation, we knew that one of the projects we wanted to do was refinishing the fireplace in the dining room. It was painted white with a sky-blue mantle.

However, the way this fireplace looked, well, it just wasn’t our taste. That’s probably why we just piled the crap in it that you see in this picture and never used it as a proper fireplace.

However, after finding out how much professionals charged for refinishing a fireplace, we decided to do it ourselves. At that time they were going to charge us a minimum of $600. I figured we could get it done in a weekend and save ourselves the money.

Steps to refinishing a fireplace

I did some Internet research on the best–and least toxic–way to get paint off a fireplace. We wanted to get the bricks back to their natural color.

I’m pleased to report that in less than 24 hours–and for not a lot of money–we got the job done. Here’s what we did.

Remove any mantle or mantel

First, I removed the wood mantle so that we could get to all of the exposed brick underneath. Notice the lovely yellow paint that was hiding behind the mantle.

FYI, a mantle, spelled LE, is a surround on a fireplace. A mantel, spelled EL, is the shelf above a fireplace.

I used a crowbar to pry the mantle away from the wall, gently, of course. I wanted it to come off in one piece.

It did, and I ended up selling the mantle on Craigslist for $30.

Strip the paint for refinishing

Next, we bought a citrus-based paint remover called Citristrip. You can buy this product at your local home improvement store (Lowe’s and Home Depot) as well as Walmart. However, I found the cheapest price on Amazon.

Citristrip is an orange-colored gel that’s somewhere between marshmallow Fluff and hair conditioner. The instructions say to spread it liberally all over the bricks.

Because it’s a paint remover, the instructions also included this warning: if spilled or splattered on wood floors, it could also take off the varnish.

So we spread plastic sheets around the fireplace and over the nearby furniture just in case. It was amazingly affordable–under $14 for the big bottle.

Then, we spread the stuff on using paint brushes. We wore gloves and protective eyewear, too.

It smelled surprisingly good–nothing sickening like the insulation our contractor originally choose when we had renovated that same house.

Now, we had to wait for it to do its job of loosening the paint. However, we didn’t have to wait long.

Within 30 minutes we knew the stuff was working. How? The gel was bubbling up and the paint was starting to fall off the brick on its own. So we got out our scrapers and started, well, scraping!

Other colors the brick was painted

While doing this project, we discovered that the previous homeowners had painted this fireplace four times. (We were only the second owners of this home.)

If you work backwards, here are the colors someone painted the brick.

White, then before white blue. Before blue, it was green. Finally, the first color looks to be a yellow or harvest gold.

I’d be willing to bet that the harvest gold paint was around the 1970s. That was the same time that my own mother was investing in harvest gold appliances for the kitchen in my childhood house.

Scrape off the old paint on the fireplace

While metals scrapers were able to get off most of the peeling paint. However, eventually we had to bring out the big guns.

What are the big guns for refinishing a fireplace? For us it was a wire brush attached to a power drill, a power sander and then the Dremel. It did a great job getting off any stubborn paint off the bricks.

This part was the most time-consuming. See Bill sitting down on the job here.

Final results of the fireplace refinishing

But eventually our hard work paid off. See the lovely, natural brick we were able to restore.

Bill built a new, natural wood-finished mantle, which you can see below.

Bottom line: we were able to keep $588 in our hands by refinishing our fireplace ourselves. However, think about it this way. If you add in the $30 we made on selling the mantle, we made money on the deal.